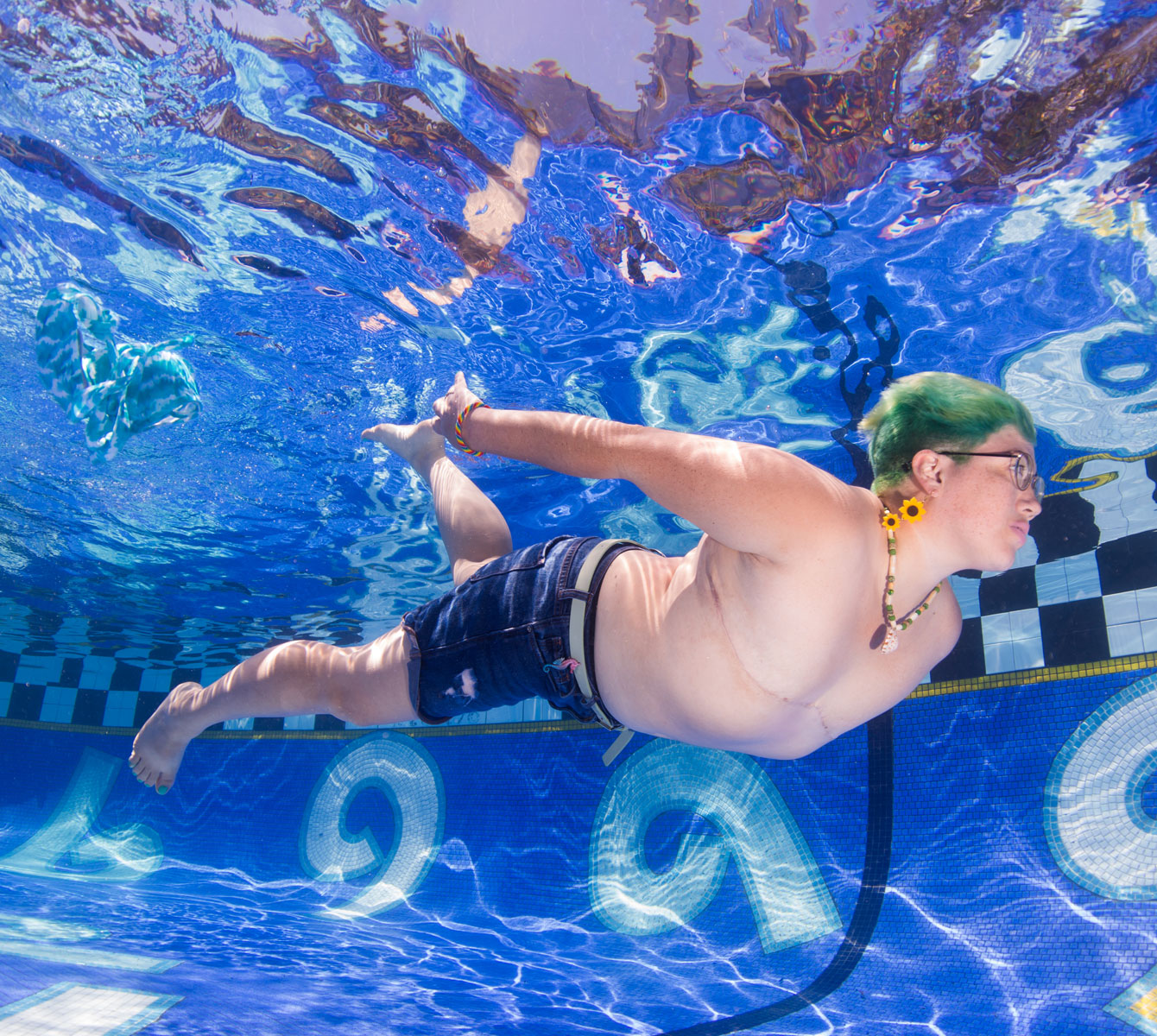 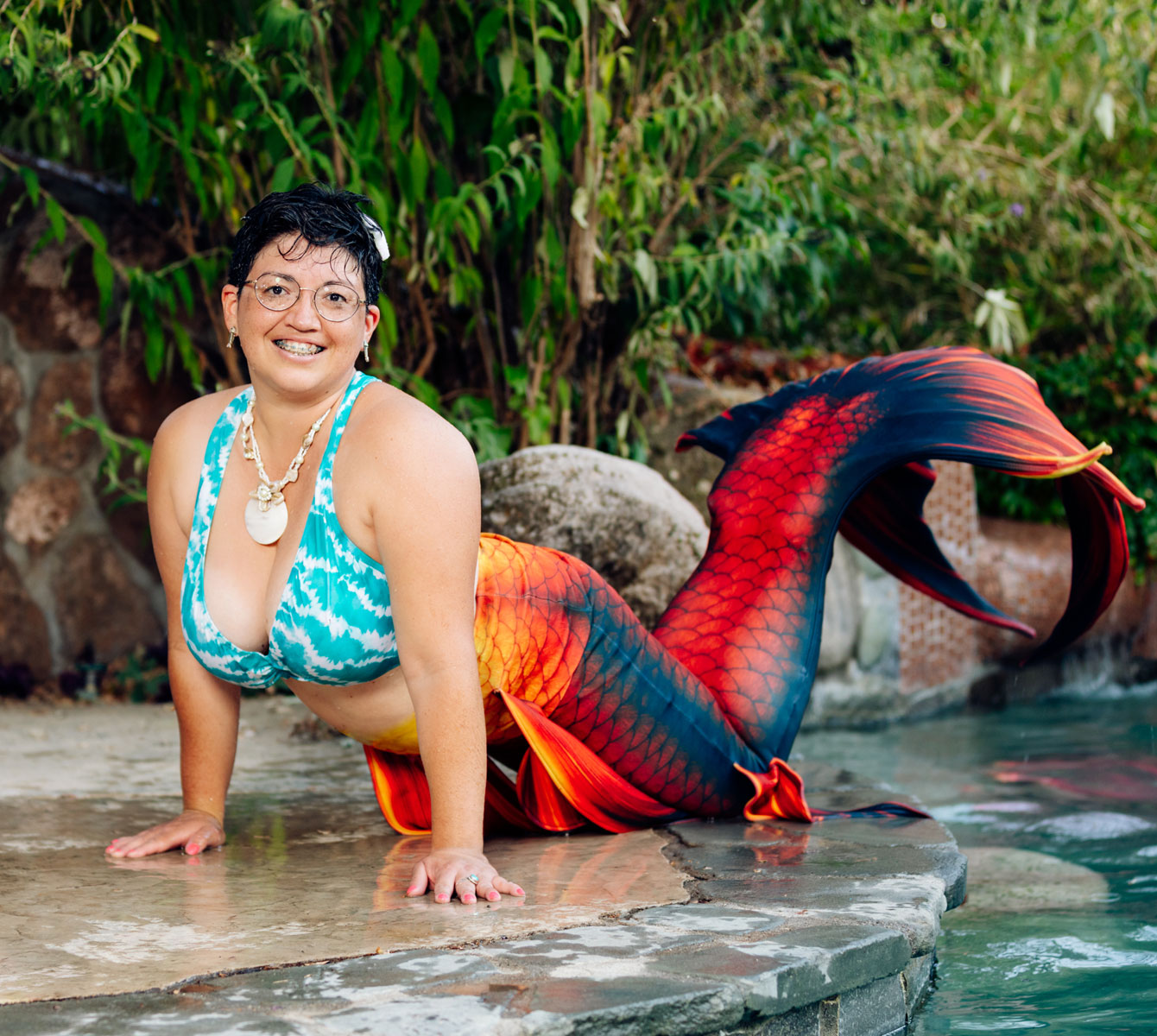 Hello, my name is Sammy the MerThey. I’m a non-binary trans mermaid. I just turned 34 years old this May. I was born in Chicago, Illinois, and I grew up all over Orange County. I also spent every summer in Arizona since my parents are divorced.

I grew up in a home of child abuse. My stepfather would beat me. He was also rather perverted and I still don’t like him. My mother divorced him when I was 16 and he’s no longer my stepfather.

When I was 21, I was sexually assaulted. I was roofied at a bar and woke up with a stranger. My clothes were covered in blood and my body had cuts and bruises. The guy left his phone number like a creep. I went to work confused because I didn’t know what really happened to me until about four o’clock in the afternoon, then I remembered some things and I called the police. They came over, I filed a police report, and they took me to the hospital to complete a rape kit. Later that night, I used the creep’s phone number to lure him back to my house while the police were hiding in the bushes. They tried to detain him but they didn’t because the guy denied everything. I did get a restraining order but the police would not serve it for me. The office wanted me to give the rapist my restraining order papers myself but that terrified me. So I never gave it to him. Also, the judge during that process was a victim blaming judgmental asshole. It was a traumatizing experience. I’ve recently become sober because I’ve realized alcohol is still triggering for me.

When I was 22, I got married but we were only together for three years. My ex husband was emotionally abusive and financially controlling so I left.

I currently live at home again with my mother but she’s unfortunately transphobic and not understanding. It’s difficult. Maybe someday we’ll have a better relationship but at the moment, we don’t.

Because I’ve been through child abuse, sexual, emotional and physical abuse, I was diagnosed with a borderline personality disorder. It’s a personality disorder characterized by severe mood swings, impulsive behavior, and difficulty forming stable personal relationships. The survival part of all these is really challenging but I have to get through it. I try to do things that make me happy like being a MerThey, working at the renaissance fair, baking, gardening, hanging out with my cat and spending time with my best friends. I try to have a good attitude towards my future.

Story of your transition to the new body 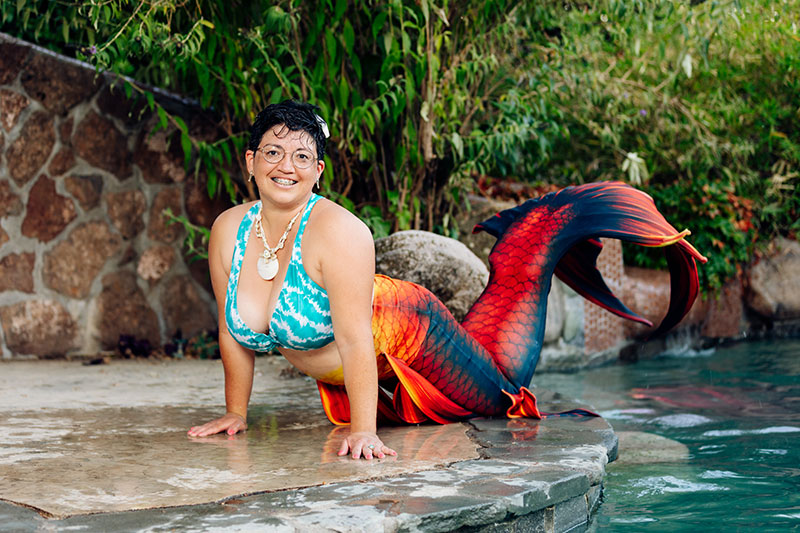 In 2017 I was hospitalized at a mental health facility for wanting to take my own life. Then I participated in a partial hospitalization program where the word non-binary and the term gender fluid came into my life. It was a safe space where I could explore changing my name and pronouns and ask questions. The idea of top surgery was brought to my attention and I imagined myself removing my chest. Before this, I didn’t know about being non-binary and not having totally transition into a binary man.

I started to go by Sammy at my work, the mermaid community, the renaissance fair and the wide range of my social communities slowly over the years. I did not come out to my mother though until February 2021, but she did not take it well. She is still dead naming me to be honest and was not supportive of my top surgery process.

Like many others, I experienced a gender crisis during the pandemic. Being stuck at home quarantined and having so much time to think really makes you realize who you are. I remembered that since I was young, I wasn’t comfortable in any sort of rigid gender roles. I joined a trans group therapy online to talk more about these kinds of issues. I’m very glad I did. It’s hard to get through this on your own.

I honestly had started the process for top surgery in 2019 but then the great pandemic hit. I had done physical exams, got clearance from my therapist and psychiatrist, did a lot of blood work, and received a diagnosis of gender dysphoria from my gender specialist. That when your gender identity conflicts with your assigned gender at birth. I found out going through a medical transition of removing my breasts would be the healthiest thing for me. I finally had the top surgery in July 2021. Now a year later I am considering micro dosing testosterone.

What inspired you to be involved in the project, underwater transformation?

My friend Luma told me about this project when I was in Sacramento for a mermaid convention. I learned more about the project, Underwater Transformaiton and I felt like this was something I can do that it would be good for me. 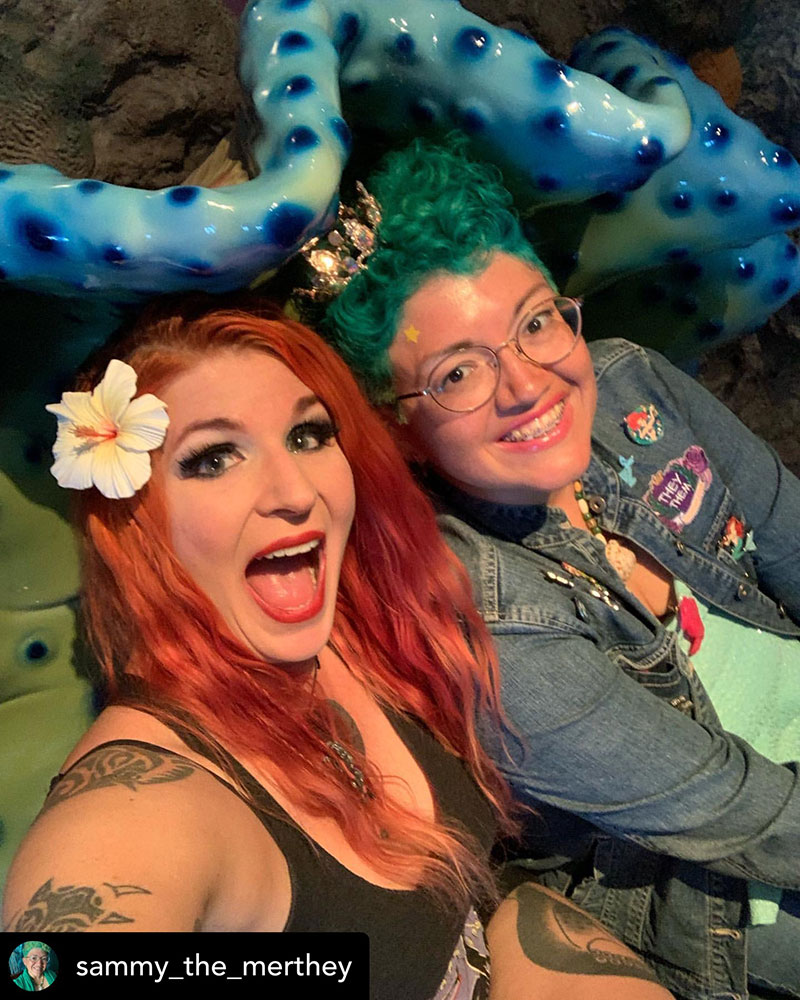 What were your plans for the photo shoot?

I was expecting this shoot to be a celebration of who I am and who I’m becoming. I’m unfurling and I keep thinking of the cycle of a butterfly emerging out of a cocoon and extending their wings. That’s how I feel at the moment. I’m past the good phase. 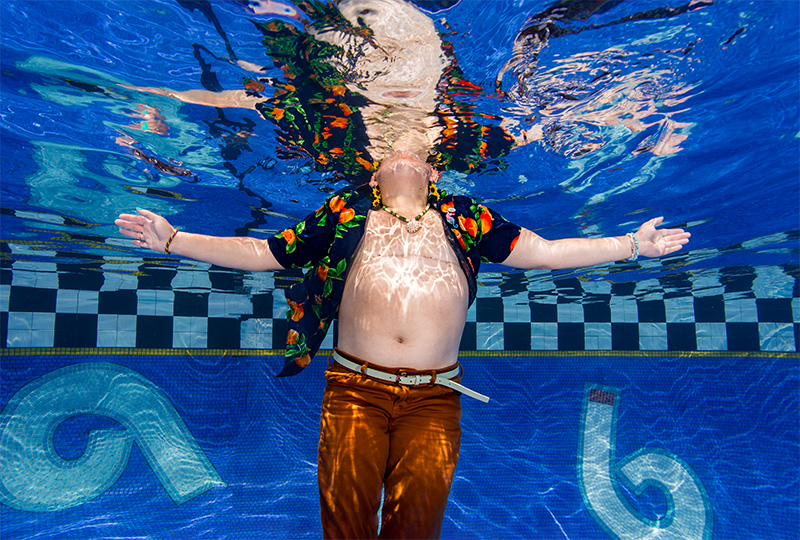 How was the experience with the underwater portrait session?

It felt really good but it also felt like a test for me. It was challenging to play with different props in a new underwater environment. For example, I was swimming in my favorite boots but they were very difficult to move around in the water. And heavy!!! I tried using my big green ball gown too but it didn’t work out. I brought a big pride flag and I think that went great. In general though I was struggling more than I expected and it was harder than I thought! Maybe I was trying too hard. I had difficulties maintaining my heart rate. I needed to slow down but I was so excited because this experience was really important for me. Though I did feel a little vulnerable because the pool was at a local hotel and there were people watching. But I just tried to focus on Erena and my plans. It was awesome.

How was your mood after you finished?

I was really proud of myself after I finished. My favorite moment was when I was just in shorts and bare feet without a shirt on! I held my old bikini top up, showing my chest and let go of the bikini behind it behind me. Metaphorically even. It used to be my favorite swim top and now I don’t need that part of me anymore.

I was super exhausted and hungry after the shoot lol.

What does water mean to you?

Water is healing. Water is soothing to me and it can be soft or it can be like a pressure washer! Like a tsunami! But for me, it’s comforting.

What is your dream?

I have a lot of dreams and I have way too many hobbies! I would like to collect more of the gender non-conforming merfolk community together and uplift each other. I’d like to write a book about my life experience to somehow help other people. I want to level up and be better at my renaissance fair job. I want to study psychology at Arizona State University and become a counselor for middle school youth. I know middle school sucks and they need the most help in my opinion. I get along pretty well with the young people and I want to be the representation for queer non-binary adults. I also grew up in a lot of trauma so I feel like I can help youth navigate that if it’s something they’ve experienced too.

Do you think this experience could help overcome your trauma?

I think the shoot really helped me to be more comfortable with my body and enjoy who I am. That was the main goal because here at home, I’m not allowed to walk around without a t-shirt on, I’m not allowed to show my scars. So this felt really good to be so open and celebrated.

How did you sleep the night of the shoot?

Good, I was exhausted and I passed out!

How was Erena working with you? 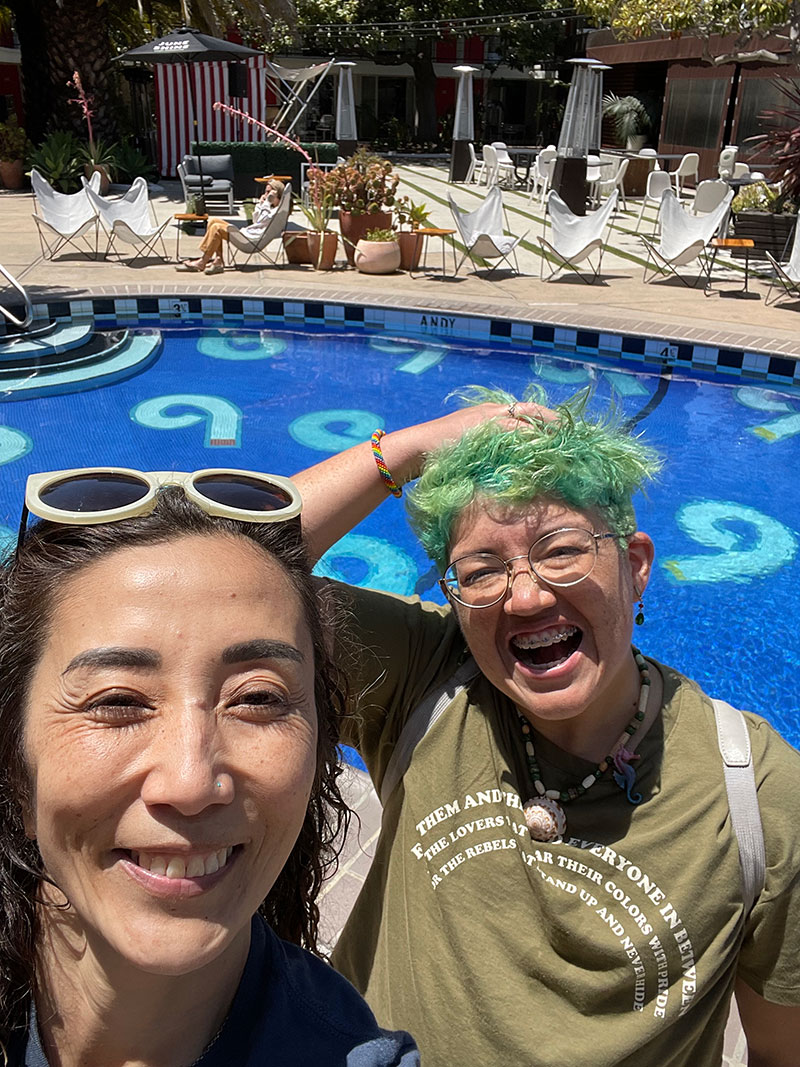 I felt really safe. She’s very validating and very affirming. She was very encouraging of everything I did and said, “You’re doing great! Awesome!” throughout the shoot. My only note is that for the next time, I want to share more about the feelings before we get in the water. Do a quick recap of the emotions I wanna process in the water. Like a very light chat of what I’ve gone through and how I want to overcome that in the photoshoot.

Would you recommend underwater transformation to other survivors?

Yes. It’s a very physical thing. I’m going to speak about the subject of the sexual assault now, because when that happens, you disassociate from your own body. Or at least that’s what happened for me. So celebrating who I am with Erena and feeling beautiful again underwater helped me rediscover myself. It was very empowering for me and I would recommend it to trauma survivors who want to let go of their rage and emotional baggage.

Healing is a process. It’s not something that’s gonna be complete and whole in just an hour or even a week, but I feel that this shoot and the project have helped me accept myself and my history. I now have beautiful images of me at my best that I can look on whenever I’m feeling low again and I love that. 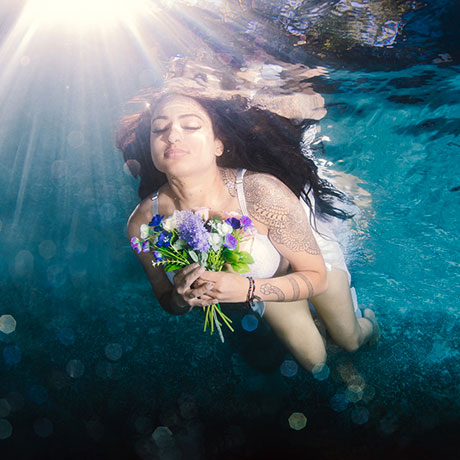 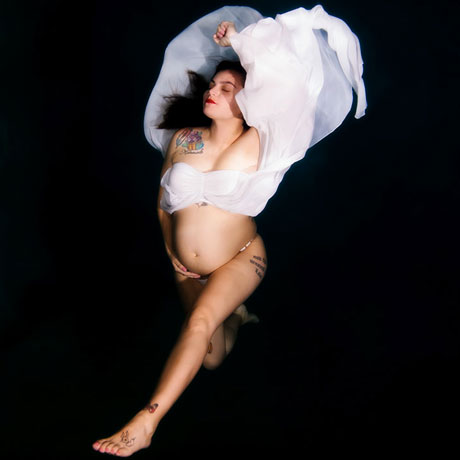