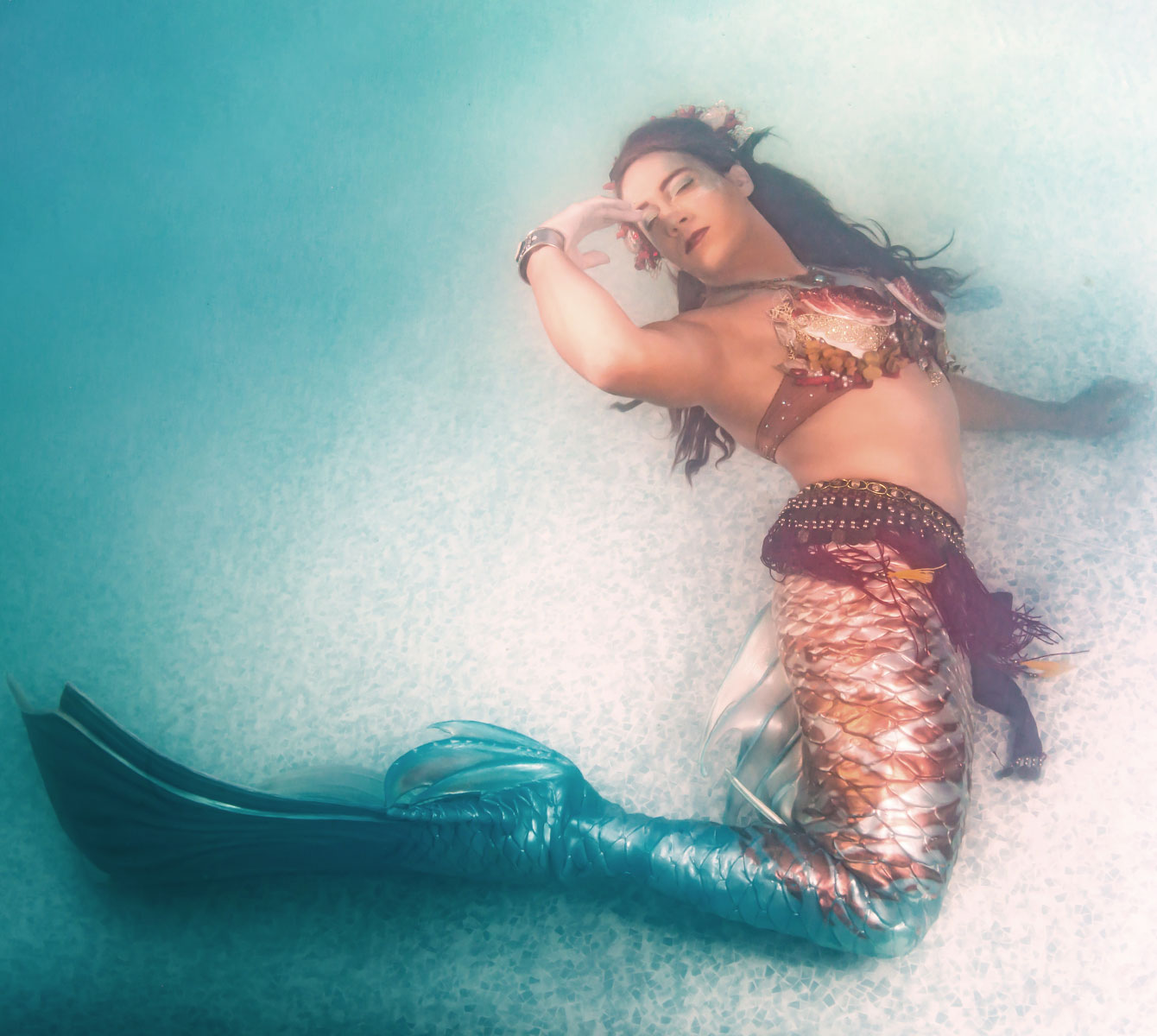 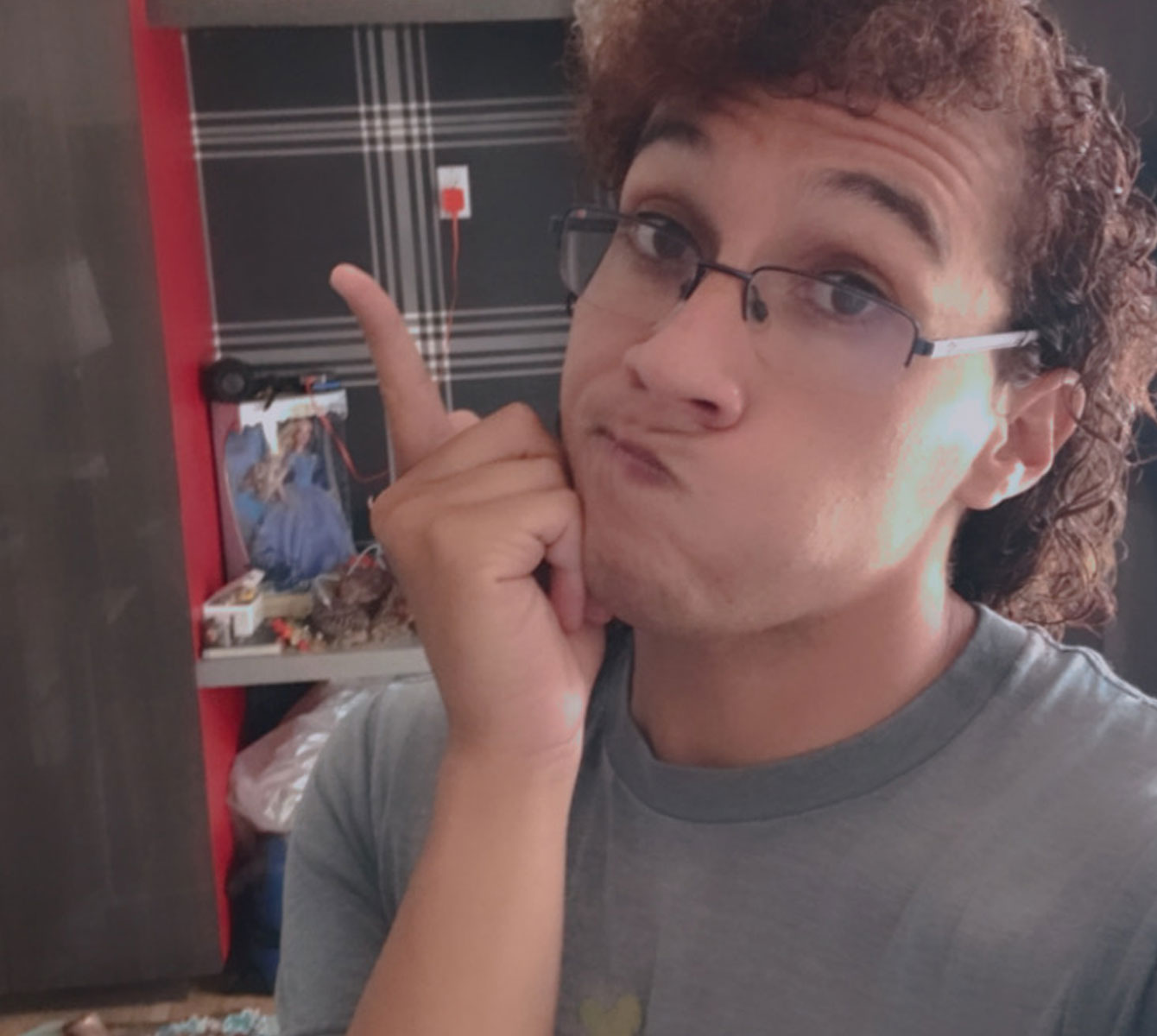 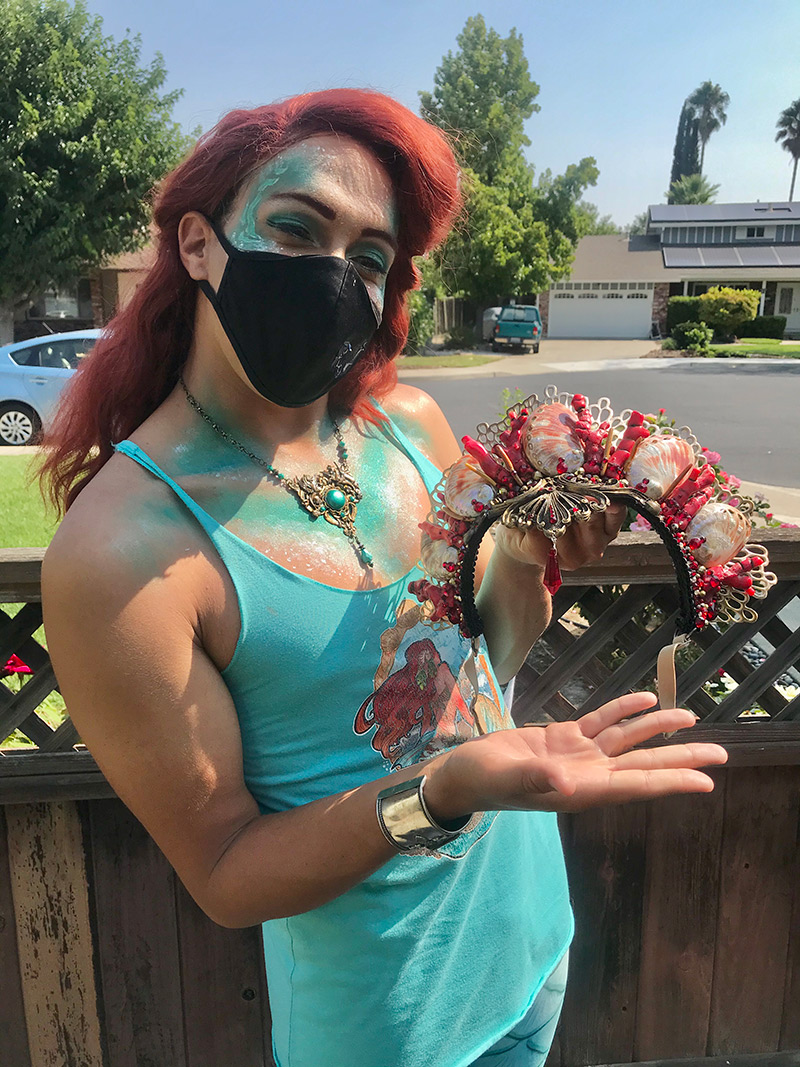 Transgender history (when and how did you discover):
Ever since I was young, I was always rather feminine for a boy. While the other guys preferred Hotwheels, G.I JOE, and Teenage Mutant Ninja Turtles, I always preferred the Disney Princesses, The Powerpuff Girls. I’ve always embraced my feminintiy and truthfully never really cared what other people thought of how I presented myself. I don’t think the thought of transitioning crossed my mind until high school when I had accepted being, at the time, a feminine gay man. I was always given doubletakes among new people whenever I would speak because of my rather high pitched voice. A trait that has always stuck with me since I was young and because of it I was often mistaken for a girl. From that moment, I started developing the mentality of “hey…maybe if I turned into a girl, just maybe the voice would finally match. However, that all changed when I discovered the realm of cosplay. It not only helped discover my passion in costuming and design, but it also in a strange turn of events helped me embrace my own feminine confidence.

I didn’t start my transition journey until late 2019, long after I started my journey as a professional mermaid. At the time prior to the start of my hormone therapy, I was scared of taking plunge due to my own insecurity. By that time, I had already started adjusting to feminine pronouns but I grew worried that the hormones would take a negative effect on my own body and that after I wouldn’t be able to reverse it if I didn’t like the new me. However, I bit the bullet with massive amounts of love & encouragement from family and friends. Now here I am, almost a full year on HRT and living in my own confidence. I’ve grown happier with myself and the small victories I’ve taken along the way. My end goal however, at the time of this interview is not yet clear. I know the journey would take a long time, and there will be times of uncertainty & self doubt, but I always tell people and fellow trans merfolk I’ve met, always take pride in progress. Take pride in the milestones and know that they are merely a chapter in your fairy tale. 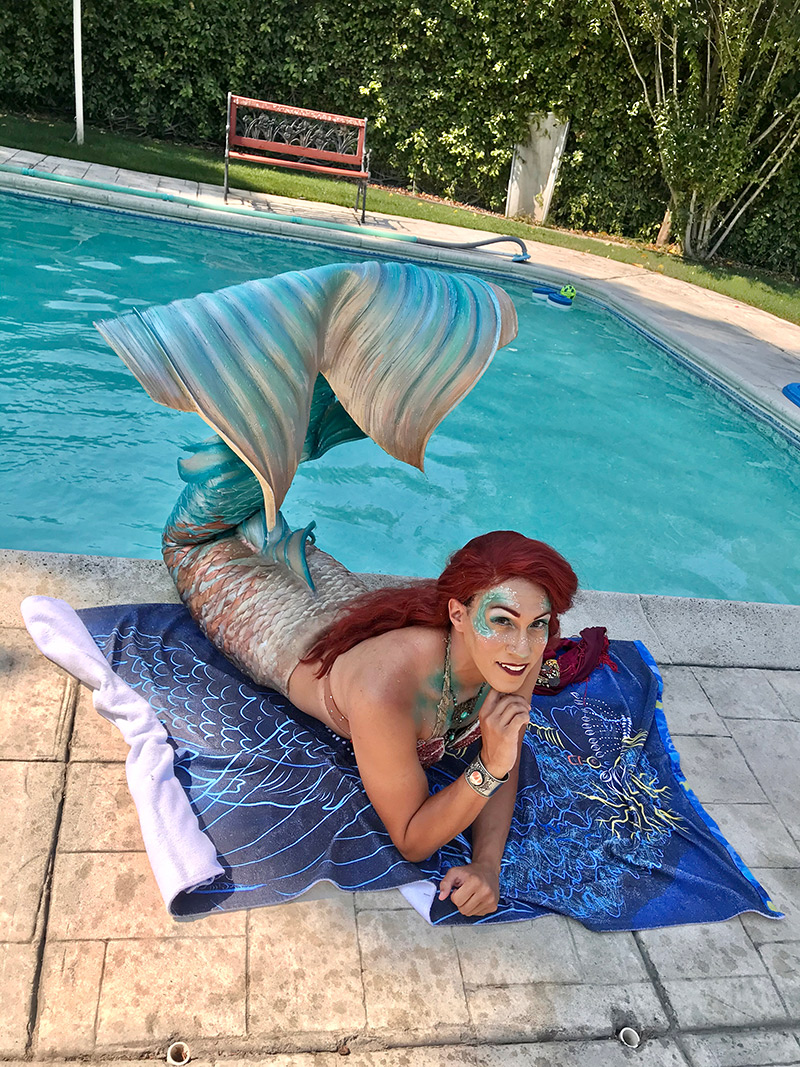 How do you support the transgender group (I saw you are an activist?):
With how underrepresented femininity is within the LGBTQ community, I’ve always felt a certain attachment to raising and amplifying the voices of my trans siblings. In 2019’s California Mermaid Convention, I was chosen to be an ambassador and speaker for trans merfolk for their Representation Panel and I was invited to speak about my experiences at a Trans Liberation panel at the Homeless Prenatal Program along with my friend Lacey Croptop, a local SF drag performer who identifies as non-binary. I am by no means a speaker, and while my story is nowhere near as dark as most trans people have faced within their lifetime. I use the support and love that I have gained through my life to pass onto others who may not have the support or acceptance, or even the confidence to be themselves. As a trans mermaid within the mermaid performing industry and community, I serve as a role model to both children and adults to live out their truest self and to teach the values of acceptance to those who may need it the most. 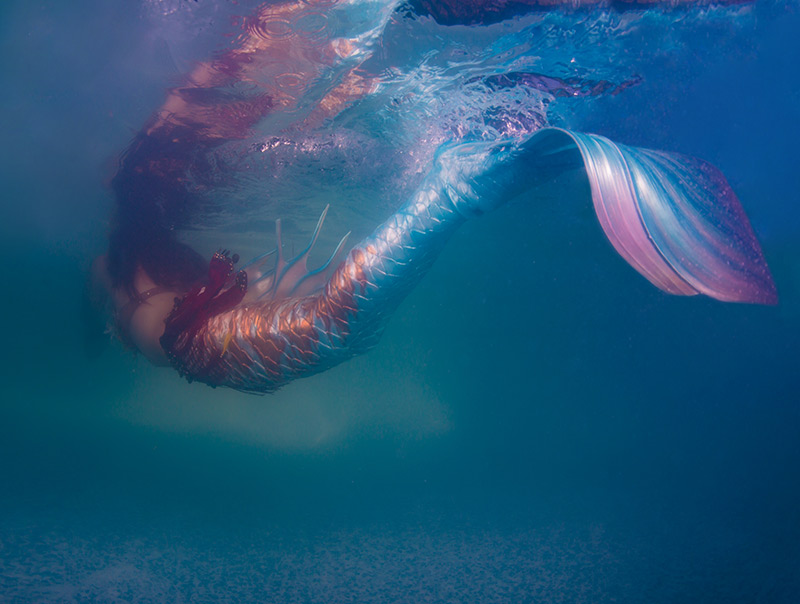 Why do you want to be involved in Underwater Healer About Face?
I had learned about the Underwater Healer Project shortly after moving to Oakland. One of the things I wanted to try and do was get some more underwater modeling under my belt, and by sheer force of chance, I happened upon Erena’s portfolio. She is truly an amazing talent with the medium of liquid space and uses it to help people who have recovered from physical/ mental trauma find beauty and confidence in their scars. Hearing their stories and reading the experiences of some of the subjects who had gone through so much really inspired me to reach out! While some personal setbacks kind of got in the way on my end, it truly was incredible to finally get to meet Erena and hear her stories and inspiration behind the project. 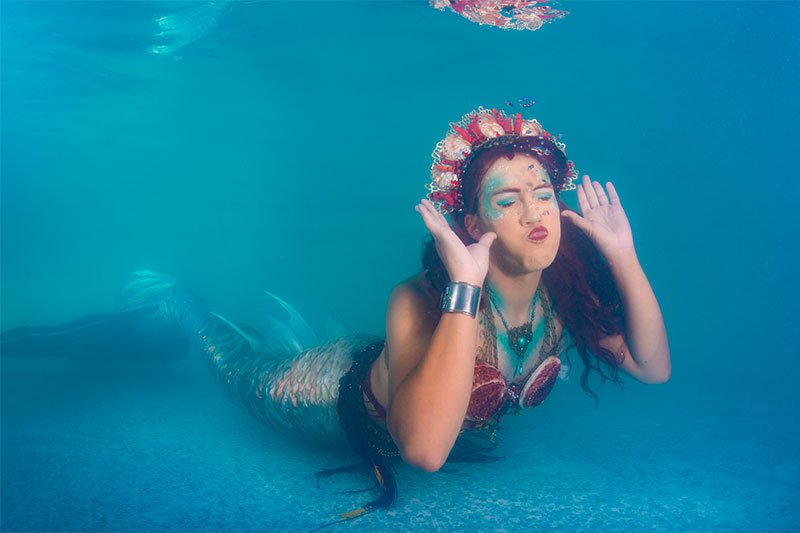 What does mermaid mean to you
To me being a mermaid means embracing confidence and strength within the element of water. Throughout maritime legends of old, mermaids were depicted as these alluring creatures that would lure men with their beauty. While the mythological aspect of the mermaid has retained its image throughout history and film, I’ve learned that being a physical embodiment of a mermaid can mean a lot of things: for some it could mean bridging the realms between ocean and land, being the inspiration for following and chasing your dreams, or representing the more exotic confidence you never realized you had. The moment the tail slips on, you feel a sense of joy that I can never fully describe. I could have a really bad week, but the moment that tail goes on and I propel myself through the water, it’s pure freedom.

What does WATER mean to you?
I have to bring up a quote that has always resonated with me about water by Jacques-Michele Crousteau.

“From birth, man carries the weight of gravity on his shoulders, he is bolted to the Earth. But man has only to slip beneath the surface and he is free. Buoyed by water, he can fly in any direction- up, down, sideways- by merely flipping his hand. Underwater, man becomes an archangel”

Water is truly a healing element. The nourishing source where all life began and evolved. It is both unpredictable and benevolent, violent as a stormy sea, and tranquil as a babbling brook. It is one of the elements that I feel can truly resonate and communicate with humankind. 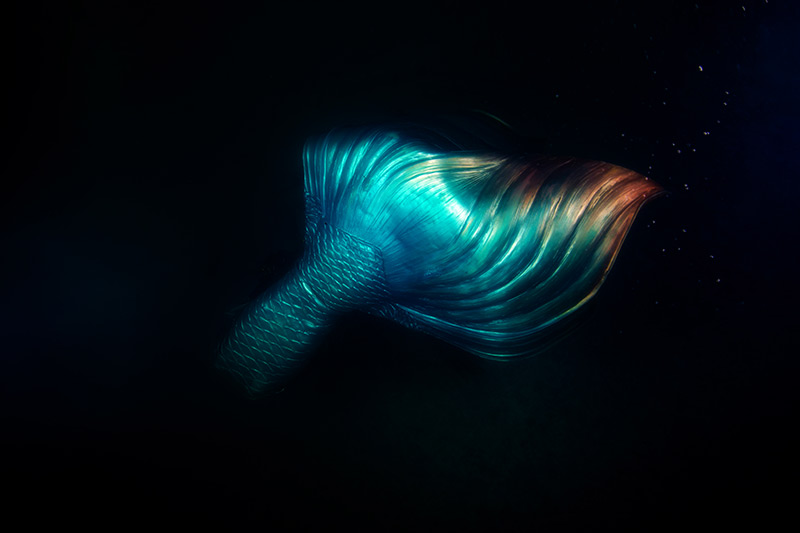 How was your mood after your photo session? Why and how
I felt so confident after our photo session was done! After wrestling with a rather foggy pool and a slight costume malfunction, I really feel like we ended up with something so otherworldly. I look at the pictures now and realized just how magical they are, in a time of uncertainly we really made magic happen.

How did you sleep the night of the photo shoot? Compared to the usual days?
I’m a little afraid to admit this. But I actually was so excited for the photoshoot that I ended up staying up until one in the morning. I’m a bit of a night owl by nature so honestly, it’s not much of a change for me. 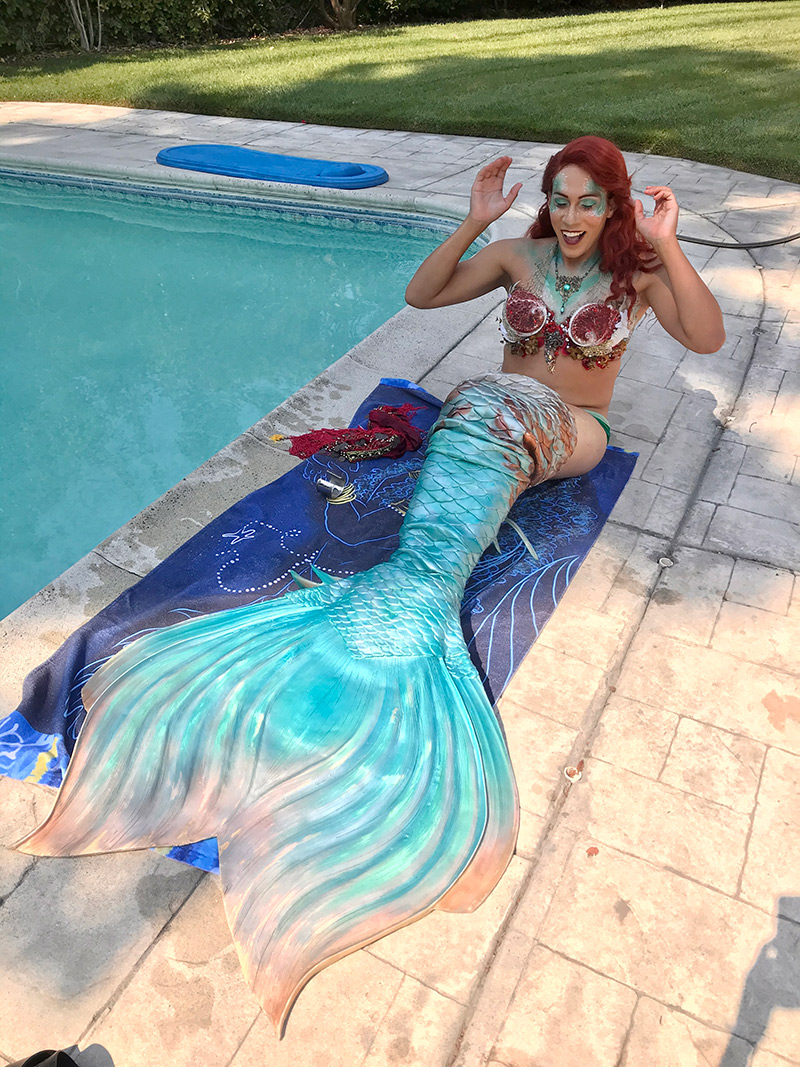 Do you think this experience could help overcoming your trauma?
I would say so. Depending on the experience. I feel just swimming and maneuvering through water is probably one of the best forms of physical therapy within the realm of modern medicinal practices. Outside of the scientific realm, you get this overwhelming sense of calm and tranquility the moment you sink beneath the surface.

Would you recommend underwater transformation to other transgender group or anyone? Why?
Without a doubt! I would say because quite a few trans people have gravitated toward the element of water as well as the ideology and symbolism of the mermaid lore. This idea of being part of two different worlds and transforming into a confident and alluring creature of legend. Water at it’s core can’t be constrained, just as the gender spectrum is always changing, always adapting and flowing. A friend of mine within the mermaid community found her feminine confidence within mermaiding and after swimming in her tail for the first time, she truly was a natural. So bound to the water. In short, yes I would definitely say so.

How was Erena working with you?
I had known Erena for a bit communicating with her through email. Though it took us a bit to finally get to meet in person for the first time, she was truly both hospitable and kind. We had an absolutely amazing time together! She definitely made sure to make the experience fun as well as comfortable for her subjects before, during and after each shoot. She’s amazingly talented and such a genuine human being that I would love to get to swim with her again real soon.

Thank you, Nymphia for working with me! 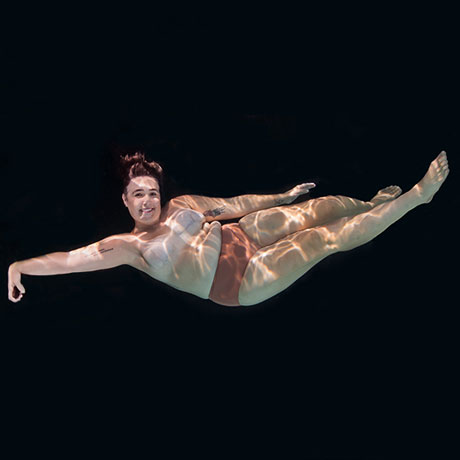 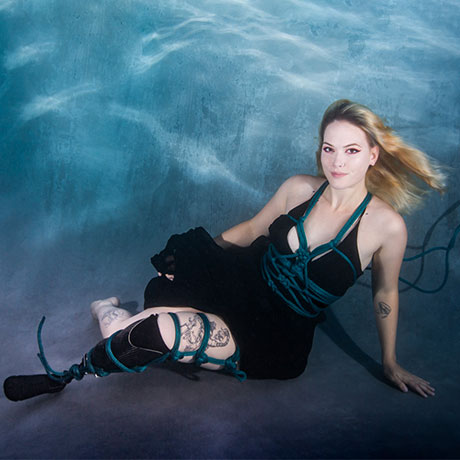